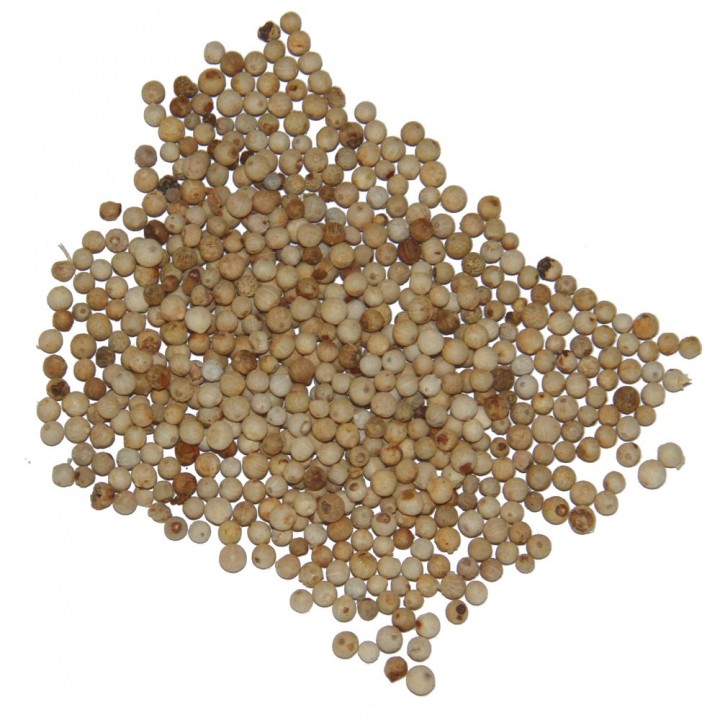 White pepper Piper nigrum, a family of pepper (Piperaceae) - a spice with a thin and strong aroma and less burning, than black pepper, taste.

The aroma of white pepper is more delicate, quite strong, taste less burning than black. If you want a  medium sharp taste, or when you want to avoid black spots in the dish white pepper will help to replace black pepper.

White pepper is good when used in meat, poultry, fish, seafood, vegetables dishes. Since ancient times, white pepper has been used in stuffing for pies and dumplings, in jellied sauces.

Good to use white pepper in minced meat, sausages, pates. Use in some pepper tinctures.
White pepper is perfectly combined with other spices: black and green pepper, basil, paprika, celery, mint, marjoram, rosemary, thyme, ginger, juniper. It is part of a mixture of spices: four peppers, Moroccan, Curry, Hamburg, Frankfurt, Bologna, Berebere.
White pepper is used as a whole, and as ground spice. When using whole white pepper, for example, in soup, they should be laid in the beginning. Ground white pepper, on the contrary, is best added at the end of the cooking process to preserve the flavor and bitterness.