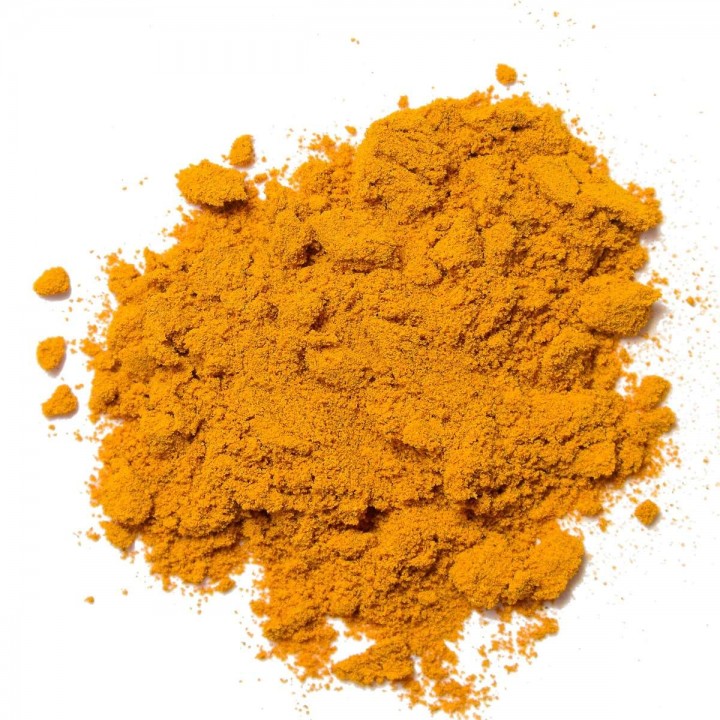 Turmeric is one of the key ingredients in many Asian dishes, imparting a mustard-like, earthy aroma and pungent, slightly bitter flavor to foods. Turmeric is used mostly in savory dishes, but also is used in some sweet dishes, such as the cake sfouf. In India, turmeric plant leaf is used to prepare special sweet dishes, Patoleo, by layering rice flour and coconut-jaggery mixture on the leaf, then closing and steaming it in a special utensil (chondrõ). Most turmeric is used in the form of rhizome powder to impart a golden yellow color. It is used in many products such as canned beverages, baked products, dairy products, ice cream, yogurt, yellow cakes, orange juice, biscuits, popcorn color, cereals, sauces, and gelatin. It is a principal ingredient in curry powders. Although typically used in its dried, powdered form, turmeric also is used fresh, like ginger. It has numerous uses in East Asian recipes, such as pickle that contains large chunks of soft turmeric, made from fresh turmeric.

Turmeric is used widely as a spice in South Asian and Middle Eastern cooking. Various Iranian khoresh dishes are started using onions caramelized in oil and turmeric, followed by other ingredients. The Moroccan spice mix ras el hanout typically includes turmeric. In South Africa, turmeric is used to give boiled white rice a golden color, known as geelrys (yellow rice) traditionally served with bobotie. In Vietnamese cuisine, turmeric powder is used to color and enhance the flavors of certain dishes, such as bánh xèo, bánh khọt, and mi quang. The staple Cambodian curry paste, kroeung, used in many dishes including Amok, typically contains fresh turmeric. In Indonesia, turmeric leaves are used for Minang or Padang curry base of Sumatra, such as rendang, sate padang, and many other varieties. In Thailand, fresh turmeric rhizomes are used widely in many dishes, in particular in the southern Thai cuisine, such as yellow curry and turmeric soup. Turmeric is used in a hot drink called the "turmeric latte" or "golden milk" made with non-dairy milks, such as coconut milk.