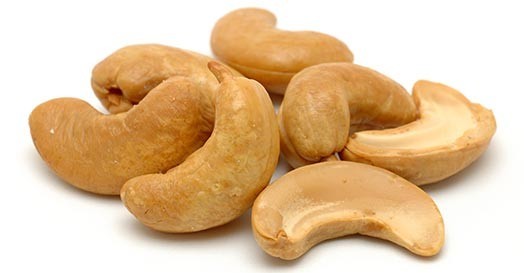 The cashew tree (Anacardium occidentale) is a tropical evergreen tree that produces the cashew seed and the cashew apple.

Cashew nuts are commonly used in Indian cuisine, whole for garnishing sweets or curries, or ground into a paste that forms a base of sauces for curries (e.g., korma), or some sweets (e.g., kaju barfi). It is also used in powdered form in the preparation of several Indian sweets and desserts. In Goan cuisine, both roasted and raw kernels are used whole for making curries and sweets. Cashew nuts are also used in Thai and Chinese cuisines, generally in whole form. In the Philippines, cashew is a known product of Antipolo, and is eaten with suman. Pampanga also has a sweet dessert called turrones de casuy, which is cashew marzipan wrapped in white wafers. In Indonesia, roasted and salted cashew nut is called kacang mete or kacang mede, while the cashew apple is called jambu monyet (translates in English to monkey rose apple).