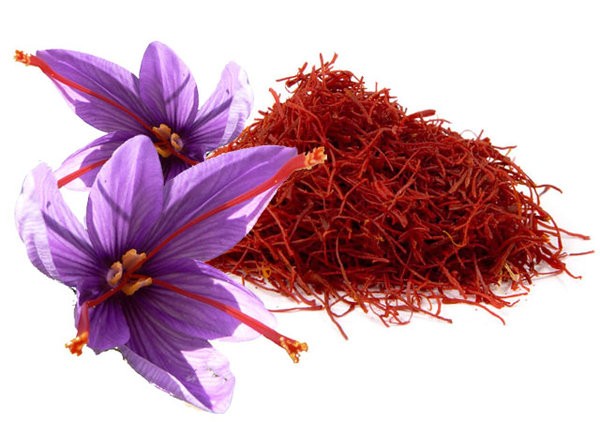 Saffron is a spice derived from the flower of Crocus sativus, commonly known as the "saffron crocus". The vivid crimson stigmas and styles, called threads, are collected and dried to be used mainly as a seasoning and colouring agent in food. Saffron is the world's most costly spice by weight.

Saffron's aroma is often described by connoisseurs as reminiscent of metallic honey with grassy or hay-like notes, while its taste has also been noted as hay-like and sweet. Saffron also contributes a luminous yellow-orange colouring to foods. Saffron is widely used in Persian, Indian, European, and Arab cuisines. Confectioneries and liquors also often include saffron. Saffron is used in dishes ranging from the jewelled rice and khoresh of Iran, the Milanese risotto of Italy, the paella of Spain, the bouillabaisse of France, to the biryani with various meat accompaniments in South Asia. One of the most esteemed use for saffron is in the preparation of the Golden Ham, a precious dry-cured ham made with saffron from San Gimignano. Common saffron substitutes include safflower (Carthamus tinctorius, which is often sold as "Portuguese saffron" or "açafrão"), annatto, and turmeric (Curcuma longa).